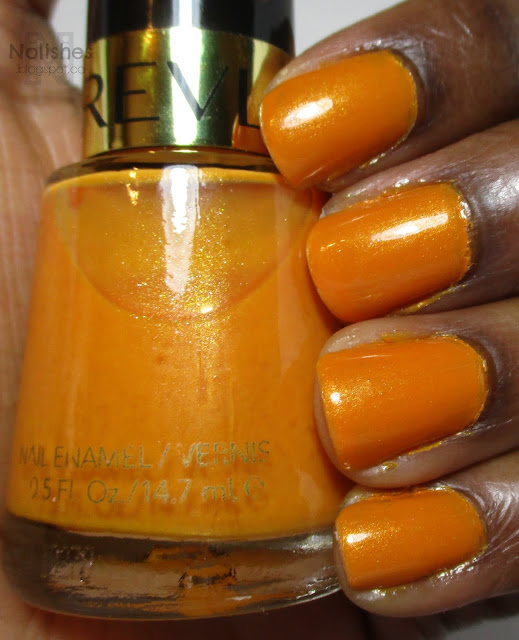 Today I have another Revlon swatch to share. I had actually resigned myself to move on from the Revlon swatch series that I had been doing for the last month or so. Even though I would love to continue with it until I've swatched all of my Revlon polishes, as someone who typically runs off of inspiration, I prefer being able to freely choose polishes to wear on a whim... This is also why my 'Project Polish' has somewhat stalled! I'm realizing that for longer projects, it would probably be better for me to have one or more of them on-going that I pop back into from time to time, as opposed to working continuously on them until they are done. Polish is supposed to be fun! I don't like feeling like I have to wear a particular polish if there's another one I'm feeling more at the moment! With this in mind I'll create a new label for the Revlon Swatch Series, so over time the collection of posts will get more and more complete.

So back to the task at hand - my swatch and review of Revlon's 'Tangerine'!  'Tangerine' is a gorgeous yellow-orange creme polish with a subtle golden shimmer. It's slightly on the sheer side, but not quite in crelly territory. It can be built up to full opacity in 3 coats, as I have done in most of the swatch pictures (I left my thumb at two coats, which can be seen in the label shot in the collage below). I'm also wearing a glossy top-coat in the main swatch pictures (no top coat on my thumb).

This polish is so fun, and summery. Even though it is a rather bright shade, it works so well with my skin tone that it feels more subdued, and almost neutral on me! It still pops, but in a really harmonious way... 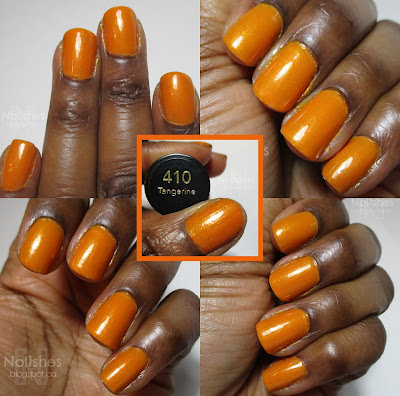 The polish was released as part of Revlon's Summer 2011 'Summer Romantics' collection, along with a light blue polish 'Blue Lagoon', and a light yellow called 'Sunshine Sparkle'. I also have 'Blue Lagoon', but I don't want to put any more pictures in this post, so perhaps I'll do a swatch and review on that polish in the near future!
Posted by HoneyBee at 1:40 PM