My last post featured 'Visions of Georgia Green', one of the two new additions to OPI's Coca Cola themed collection of polishes. Today's post is on 'Centennial Celebration', the other new addition to the line up. 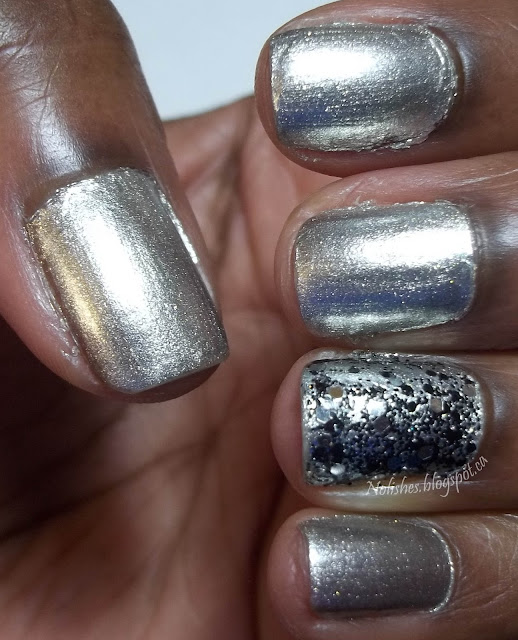 Both polishes were made to celebrate the 100th anniversary of the Coca Cola bottle. 'Visions of Georgia Green' was a take on the green glass soft drink bottle, while this one appears to be a take on the classic clear, colourless bottle. 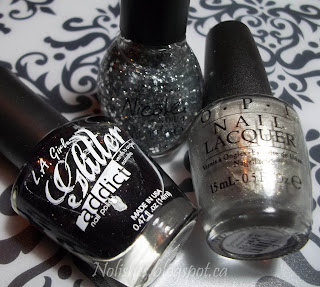 At first glance, I was going to pass on buying 'Centennial Celebration' because I already have a lot of silver polishes. However, I purchased 'Visions of Georgia Green', and I loved it so much that I decided to go back and give this polish a try as well. The thing I realized with 'Visions...' is that it wasn't just the colour of the polish that made it special, it was the texture and consistency as well.

These polishes are glass-themed, so they attempt to characterize certain elements of glass such as its translucence, its reflective nature, and its sparkle. Accordingly, the polishes are semi-translucent, metallic, and contain micro-glitter particles.

In addition to the cool textural properties of 'Centennial Celebration', this particular shade of silver is a little different as well. There is a slight gold tint to this silver which adds a little warmth, and also makes it seem more luxurious.

All in all, I really like this polish, and I'm glad that I decided to give it a try! 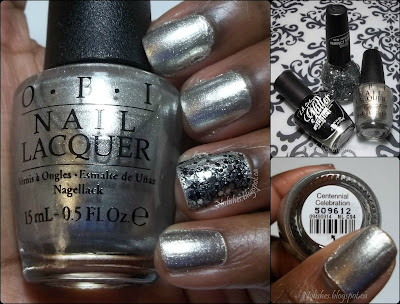 Posted by HoneyBee at 3:43 PM No comments:

OPI added two new polishes to its Coca Cola Collection to celebrate the fact that 2015 marks the 100th anniversary of the iconic Coca Cola bottle. Today's manicure is a swatch of 'Visions of Georgia Green', my favourite of the two new releases. 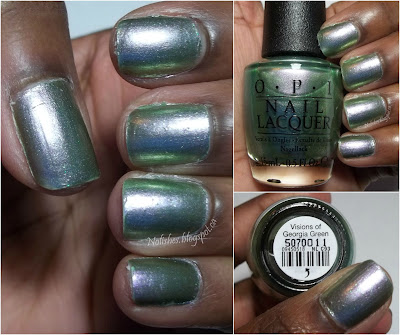 The polish is a translucent silvery-green, frosted, shimmery, subtle duo-chrome, that is reminiscent of the classic pale green glass coke bottle. I love the concept, and I love how the polish looks on my nails. I normally don't by a lot of polishes with frosty finishes, but this one is a little different - it seems somewhere between a frost and a metallic and I don't own anything like it.

All in all, I am quite happy with this purchase!
Posted by HoneyBee at 9:45 AM No comments:

Today's manicure was inspired by the cool shades of the colour spectrum: 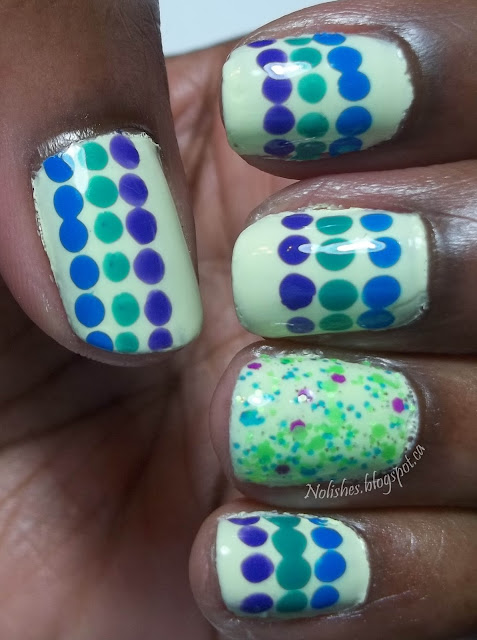 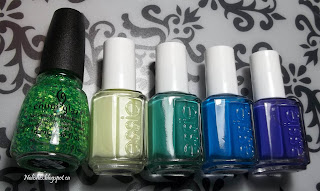 I really love the colour combination used in this manicure! I'm especially impressed with 'Chillato', the pale greenish-yellow colour that I used for the base of the manicure. I think that the colour is so unique and interesting, and it looks great both in the bottle, and on my nails.

I didn't take my time doing the dotting, so the dots aren't as uniform and precisely placed as they could be, but in real life, this is not as noticeable as it is in the close up photo above!
Posted by HoneyBee at 6:00 AM No comments:

Today I have a modified version of my 'First Blog Anniversary' manicure from my last post: 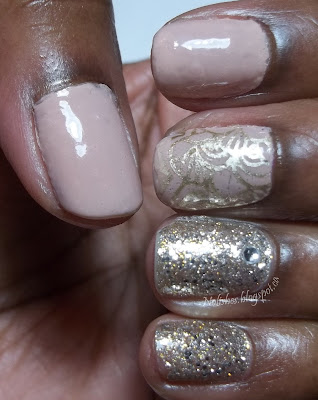 I toned-down the manicure by changing the thumb, index, and middle fingers to a neutral polish, and then I stamped a design on the middle finger in gold, to tie the whole look together. 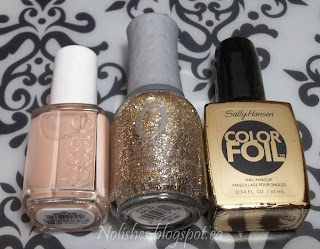 The neutral polish that I used was 'Brides to Be' from Essie's 2015 Bridal Collection. It's a beautiful creamy taupe colour, that looks like a lighter shade of the same colour of my natural nail bed. The glitter polish is Orly 'Halo' from their 2012 'Naughty or Nice' holiday collection. It contains a mix of gold and silver glitter particles. The metallic gold polish that I used for stamping is one of my most used polishes - Sally Hansen Color Foil 'Liquid Gold'.

Overall, I'm really happy with the way that this manicure turned out. It gives a nice 'muted bling' effect that looks both casual, and elegant all at once. Also, it's always nice to be able to get two looks out of one manicure!
Posted by HoneyBee at 9:45 AM No comments:

Today, I decided to do an extra sparkly manicure to celebrate the first anniversary of this blog!


The polish I used for this manicure was Orly's 'Halo'. I also added a rhinestone to accent my ring finger. It's a pretty simple look in terms of techniques and embellishments, but this polish delivers so much in the way of sparkle and shine, that the finished look is still really high impact. I absolutely love it!

I really can't believe that it's already been one year since I started chronicling my passion for nail polish and nail art! It has been so much fun to share something I really enjoy doing with all of you! Thanks so much to anyone who has ever dropped by to check this blog out - I hope that you have enjoyed reading it as much as I have enjoyed writing it!
Posted by HoneyBee at 10:50 PM No comments:

I threw together this fun and vibrant look because I wanted to try out this awesome neon green nail polish that I bought recently: 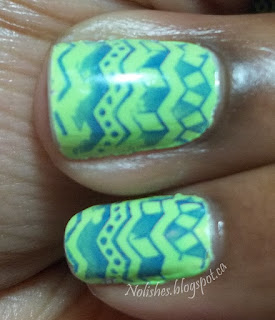 The neon green polish is 'Vibrant Vibes' from Essie's Summer Neons 2015 Collection. I stamped over it with Sally Hansen Insta-Dri 'In Prompt Blue' using a tribal print image from Bundle Monster plate BM-402. It's not the best stamping job ever, but I do like how the colour combo looks! 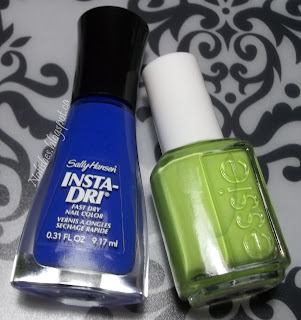 Posted by HoneyBee at 5:00 AM No comments:

Today I have a quick impromptu manicure to share: 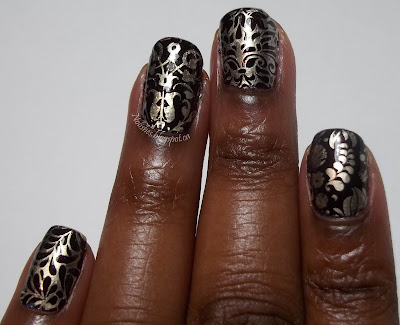 For this nail stamping manicure, I used as my base polish 'Black Cherry Chutney' from OPI's India Collection for Spring 2008. The gold stamping over it was done with my favourite gold nail polish for stamping, Sally Hansen Color Foil 'Liquid Gold'.

Here's one final picture of the manicure showing my right hand. 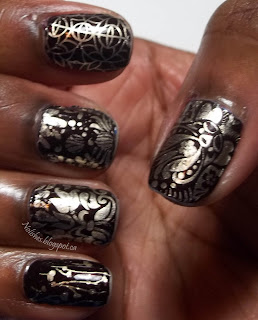 Posted by HoneyBee at 6:00 AM No comments:

Happy Independence Day, to those of you in or from the USA!

Today, I have a 4th of July inspired manicure to share: 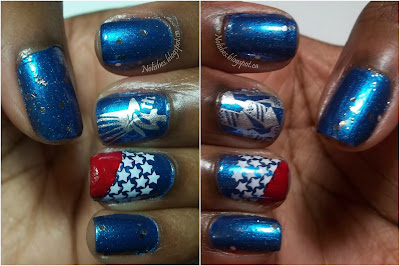 I really like how this manicure turned out! I've really been trying to tone my designs down lately. I find that it's more of a challenge to communicate a theme with as few elements as possible, so it has been really fun trying to meet that challenge by keeping my stamping manicures more simple and streamlined.

Now, that's not to say that I will never again do manicures which use a lot of patterns, techniques, or colours - because those are certainly a lot of fun to do too! But for now, I'm enjoying this more edited approach. 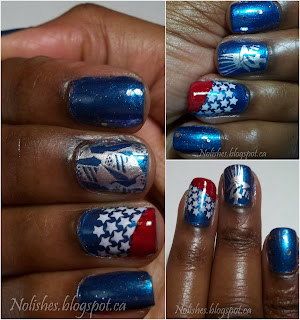 Anyways, that's it for today. Thanks for stopping by!

Posted by HoneyBee at 9:11 PM No comments:

Today I have a Canada Day inspired manicure to share with you: 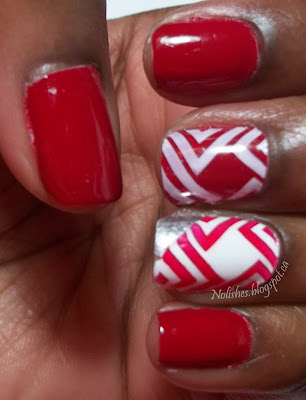 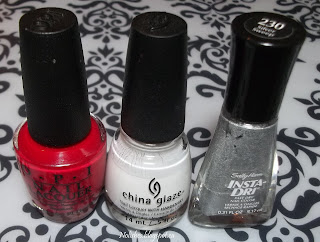 Last year I did a maple leaf themed manicure with tons of filler patterns. You can see it in the picture below. The stamping isn't perfect, and the design is a little busy. At the time, I had only been nail stamping for a few months or so, and my skills were kind of shaky. Unfortunately, I no longer remember which polishes I used, as this was done just before I started the blog so I didn't really take note. 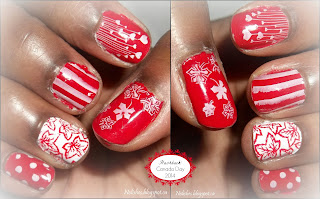 This year I wanted to simplify, and just use the colours of the Canadian flag as the inspiration. I chose a geometric design, and only stamped it on 2 fingers. I really love this low key interpretation! 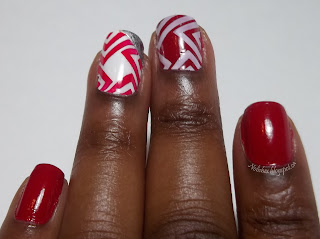 Thanks for stopping by! And a very happy Canada Day to all those who are celebrating!
Posted by HoneyBee at 12:00 PM No comments: