I'm really pleased with the way this dotted crackle effect turned out! The cracks on the blue shimmery dots kind of resemble the edges of the facets on the surface of a cut blue sapphire. It's like there are small gemstones all over my nail!

The only thing I was a little disappointed with is that I had trouble getting the crackle polish to work on 2 of my nails. The very first attempt with crackle dotting was done on the 3 fingers prominently displayed in the picture above. I was originally going to do something else with my other two fingers, but changed my mind (more on that later). When I went back to dot the remaining 2 fingers, for some reason, I couldn't get the polish to crack any more! I even went back and started from scratch 3 separate times, but could not recreate the effect.

When I first tried it, I didn't put much thought into it - I was experimenting, so I didn't pay too much attention to my technique. I just put a small blob of polish on the back of a piece of plastic, and started dotting. It worked fine. When It came out beautifully, and I later decided that wanted to continue doing it, I just could not recreate the results.  It was so frustrating! I may have to try again with a different polish. Here are some additional shots of the manicure: 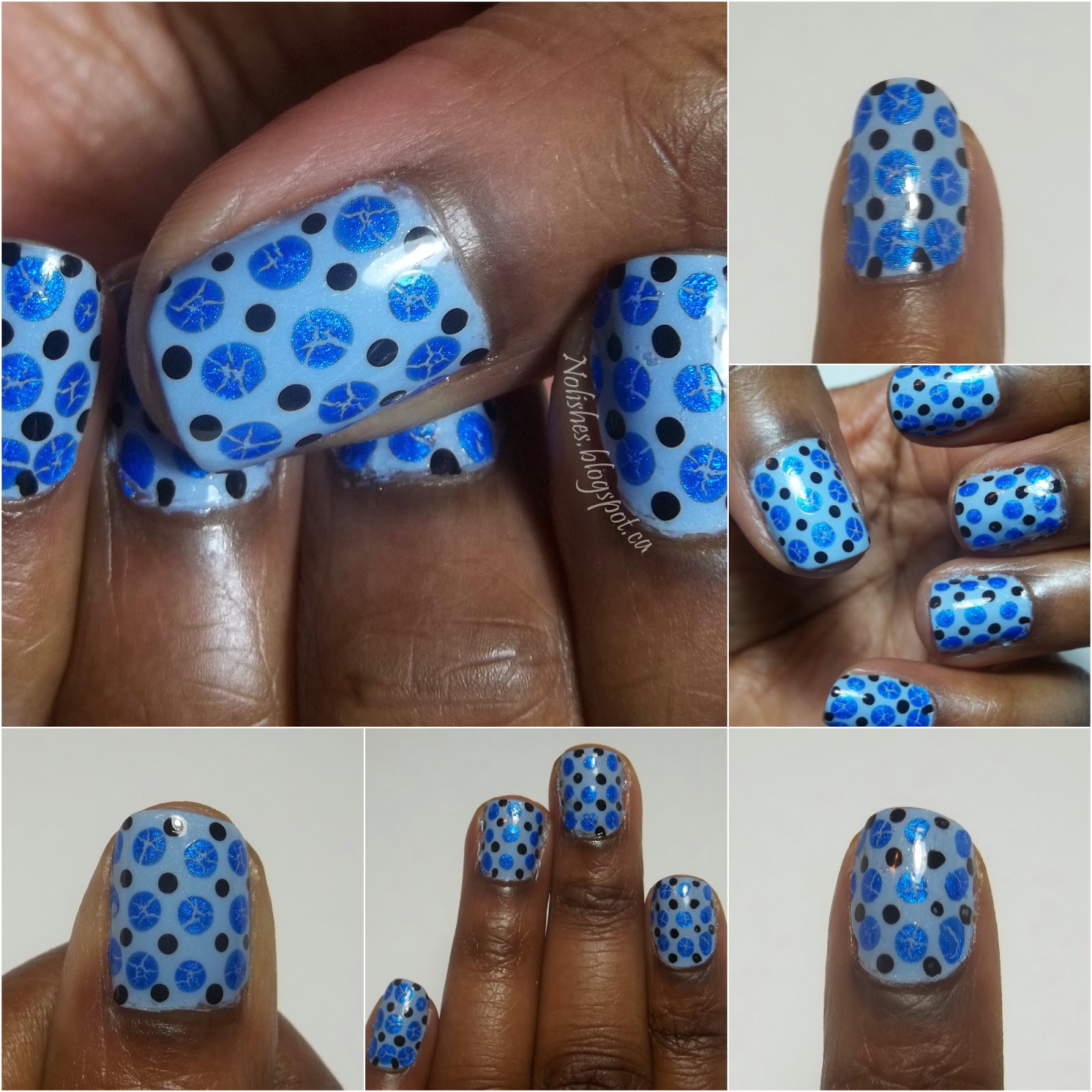 On my left hand, I did a different crackle mani using the same colours.  Originally, my plan for both hands was to do a stamped hounds-tooth design (from Bundle Monster plate BM-322) on my middle and ring fingers, and use the dot design only for the thumb, index and pinky fingers.  I painted my nails with 'Rock the Boat', and did the crackle stamping on the accent fingers of both hands. I started doing the dots on the right hand. When I finished, I didn't like the way the 2 designs looked together, so I decided to nix the hounds-tooth and just do the same dot design on the ring and middle fingers (as mentioned above, this is where it all started to go wrong!).

When I got to my left hand, I didn't want to remove the hounds-tooth because I liked the way it looked, so I just decided to do another design on the remaining three fingers that worked with the hounds-tooth pattern. Here's the finished result:

Since this manicure also features a crackle polish technique that I am now using for the second time, I think I should go ahead and acknowledge it.  I'm calling it the 'Crackle Curve'. It's the sweep of crackle nail polish that starts at or near the base of one corner of the nail, and ends up at the top corner of the opposite side of the nail. The other time I used this technique was in the Pink, Red, and White Valentine's Day Mani. So to make it official:

Stay tuned for my next post which will be the final instalment of the 2015 Crackle Polish Challenge!
Posted by HoneyBee at 11:31 AM No comments:

Today I have a failed crackle nail polish experiment to share:

As part of the 2015 Crackle Polish Challenge, I've been trying to find creative ways to use crackle polish, in order to find alternatives to the the traditional crackle combo (like the one pictured in the upper left quadrant in the collage above). Sometimes, the ideas work out, and result in beautiful manicures. Other times, the results aren't so pretty - today's manicure falls into this category!

Originally I wasn't going to post this, but I changed my mind. I still think dissolving parts of a crackle mani is a good idea, it just take some skill and technique to properly execute - which I haven't yet acquired! I'm going to have to do a bit of research to figure this out.

I tried to remove the polish using a cotton swab soaked in nail polish remover. I found it really hard to control the final shape of the dissolved area using this method, which is why the results are so messy looking. One thing I do like though, is how a border of the orange base colour is left around all of the clear sections where the polish was removed - it's a pretty interesting effect.

The polishes used for the experiment were Essie 'Capri', and Sally Hansen Crackle Overcoat 'Distressed Denim'.

There are only 2 more bottles of crackle polish left, in the Crackle Polish Challenge - I'm so excited to be almost at the finish line!
Posted by HoneyBee at 11:35 AM No comments:

I like how my thumbnail turned out in this manicure. The tape removed cleanly, and the way it breaks the shatter polish into sections is a pretty cool effect.  Overall, I'm kind of on the fence about this manicure - I don't necessarily hate it, but I don't love it either. Oh well, the beautiful thing about nail polish is that you don't have to wear it forever!  LOL!
Posted by HoneyBee at 6:30 AM No comments:

I'm back with another instalment of the 2015 Crackle Polish Challenge. It was really nice to have a little break from crackle manicures, but I'm really looking forward to finishing the last 4 manicures in this series (that's 4 including today's).

It seems to be a big trend right now in the nail art community to include sections of clear polish in manicures.  So to finish off the Crackle Challenge, I've been thinking of ways to combine today's trend with crackle polish, a big trend from about 4 years ago.

I like how this manicure turned out.  I really like the minimalism.  It doesn't feel like a crackle mani, it feels more like a clear mani with a little embellishment.  I think this really updates the crackle look by toning it down.

Polishes Used:
China Glaze 'Pinking out the Window' (Spring 2015 'Road Trip' Collection)
OPI 'Pink Shatter'
Quo by Orly 'Soft Spot'
Stay tuned for my next post, which will also feature a fusion of the clear polish trend of today, and the crackle polish trend of the recent past!
Posted by HoneyBee at 6:30 AM No comments:

Today I have a post-St. Patrick's day mani to share with you. It features one of my favourite colours, chartreuse. Chartreuse is a combination of green and gold, so it lends itself perfectly to this subtle, elegant interpretation of St Patrick's day nails!

Overall, I really like this mani. It's simple, but I love how well the two polishes match each other. I love having different versions of the same colour - it's such a nice, understated look to pair identical shades of polish in different finishes.

I plan to continue with the Crackle polish challenge for my next few manicures.  I have 4 crackle polishes left to complete the challenge: 2 blue crackles, a red one, and a pink one.  Stay tuned to see what I come up with!
Posted by HoneyBee at 11:16 PM No comments:

For today's manicure, I ended up taking a little break from the Crackle Polish Challenge in order to squeeze in something for St Patrick's Day. 
I really love how this manicure turned out! I can't believe how gorgeous the kelly green shade of the base polish ('Green-Wich Village') is, and I'm pleased with how the stamping turned out! Also, it was so much fun to be able to concentrate solely on what colours and images I wanted to use, and not having to worry about trying to work crackle texture into the design, as I've been doing for my last 17 manicures!

I really hope that I can get one more St Patrick's Day mani in before the 17th, because I have a couple other green polishes in mind that I think would be perfect!

Posted by HoneyBee at 2:41 AM No comments:

Featured crackle application:
Using crackle polish as the background texture for a dotticure 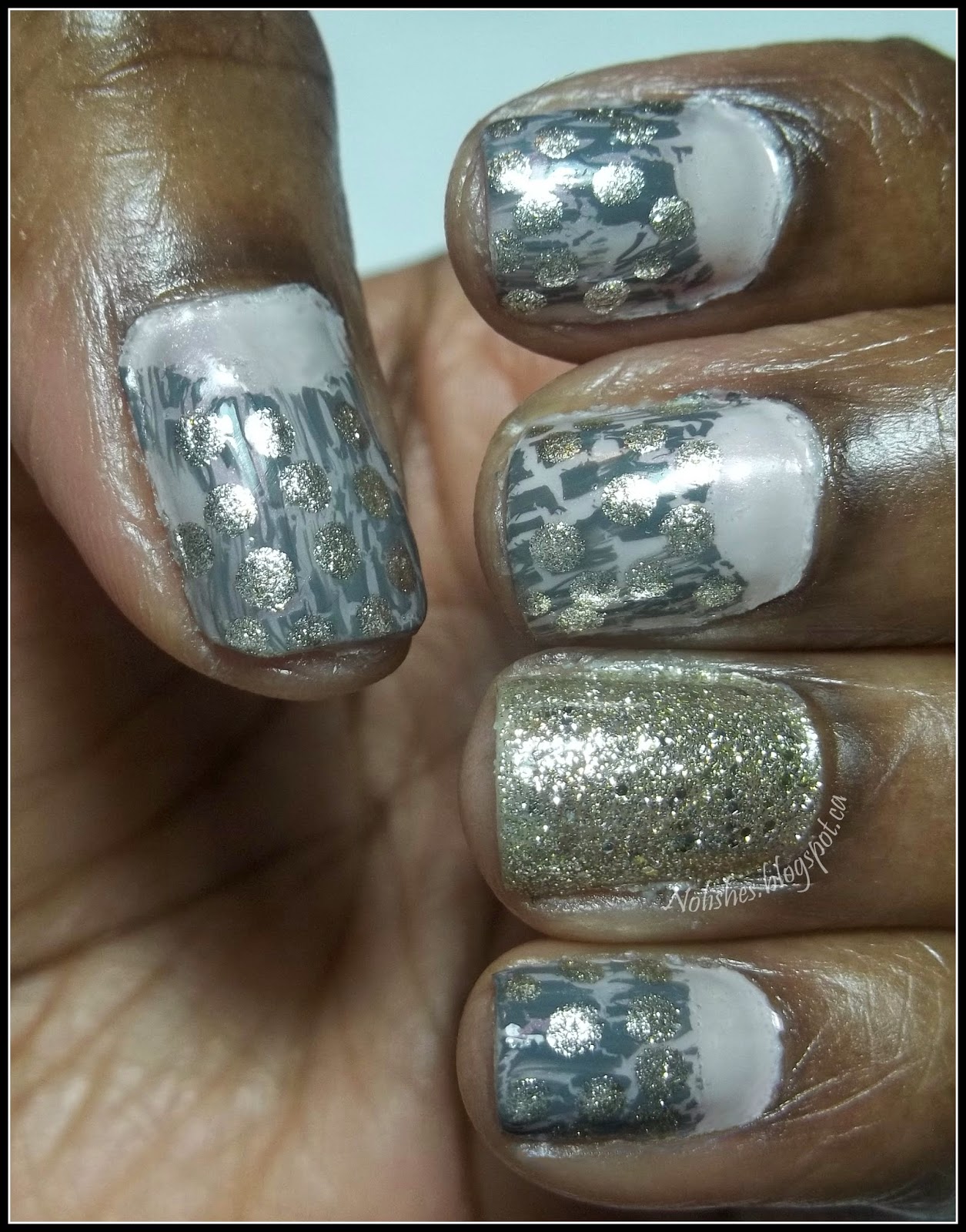 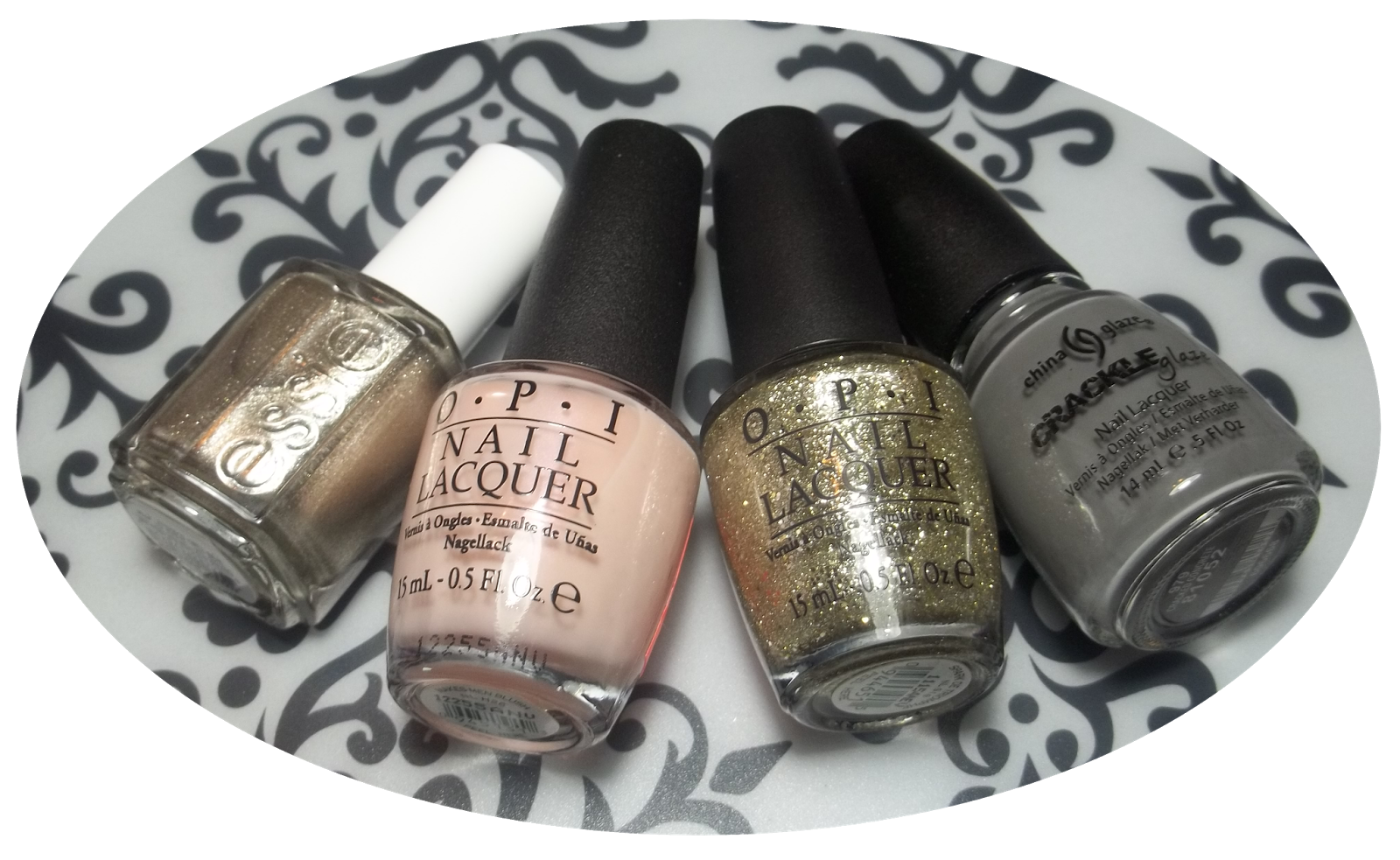 I really love the way 'Spark De Triomphe' and 'Jiggle Hi Jiggle Low' match each other. The white gold is such a beautiful colour, it's great to have it in both a glitter and a metallic version! If this weren't the crackle challenge, this manicure would look beautiful with 'Jiggle' covering the entire upper portion of the nail, above the pink half moons.

I used circular paper reinforcements to serve as a guide for the half-moons.  Next time, I may try lowering them a bit, as I feel the half-moons are just a touch too large.

Overall, I'm happy with the way this manicure turned out.  In real life, it looks pretty cool on my hands. The grey crackle with the dots over it reminds me of studded leather - it's a pretty cool effect!
Posted by HoneyBee at 6:15 AM No comments: 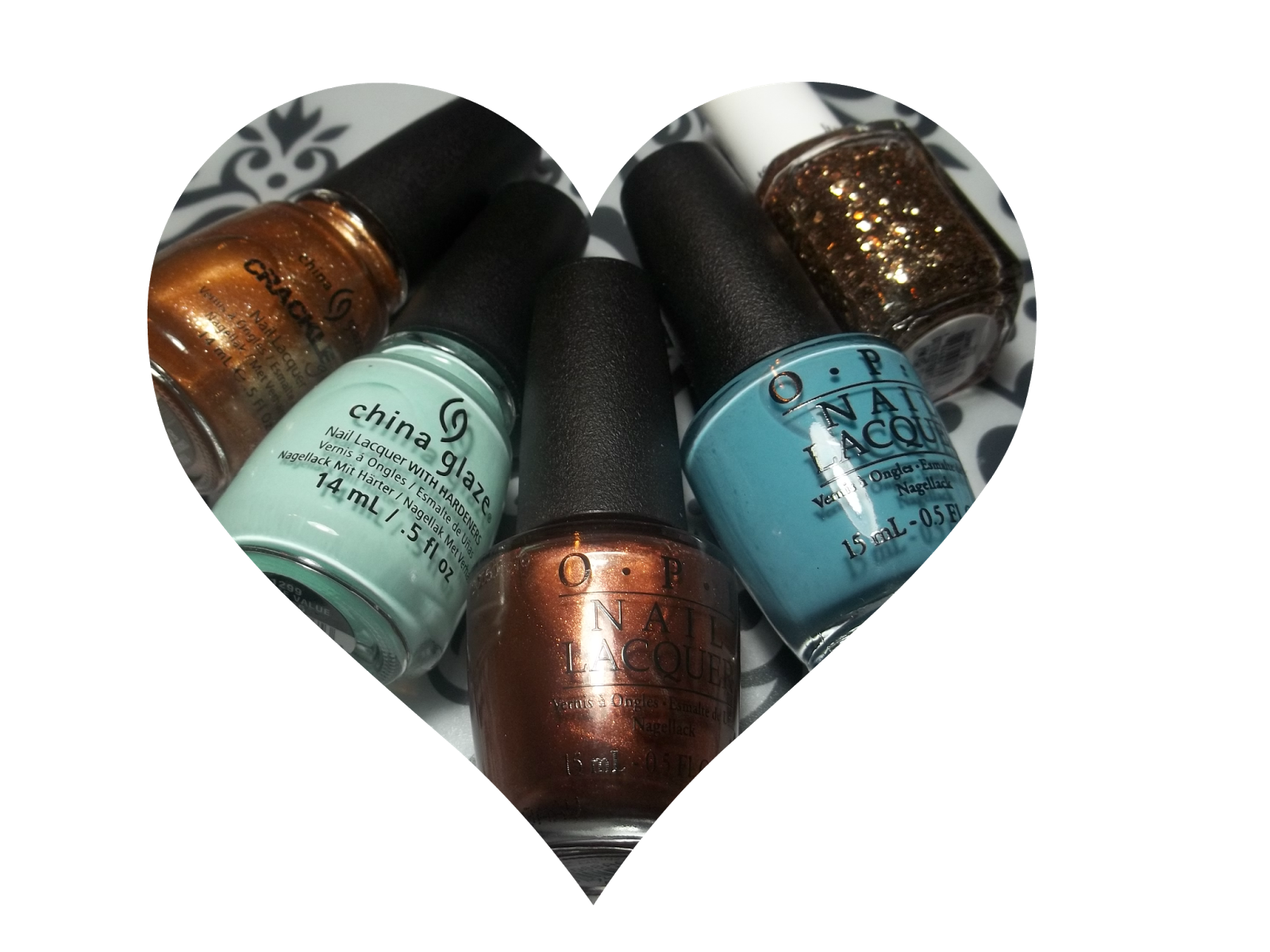 This manicure was really quick and easy to do.  The wisps of crackle polish didn't end up looking exactly as I had envisioned them, but I still think the end result works. Overall, there's not much else to say about this one, so I think I'll keep this post short and to the point!
Posted by HoneyBee at 12:10 AM No comments: