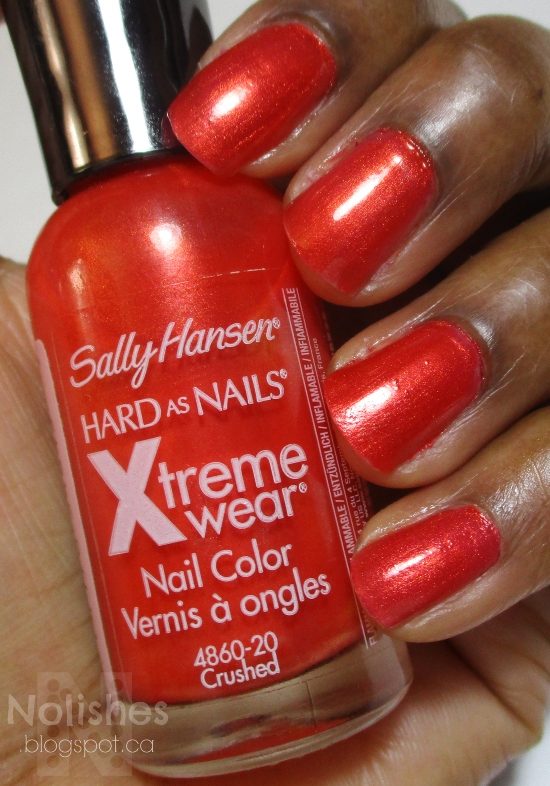 Sally Hansen Xtreme Wear 'Crushed' is a gorgeous, shimmery, bright orange polish that just screams summer. It's one of those super-finely milled shimmer polishes that essentially reads as metallic on the nail. It gave great coverage, had a decent drying time, and there were no issues with application. The polish is really fun and cheery to wear due to the in-your-face texture, colour and shine. All in all, I'm really happy with this polish.
Posted by HoneyBee at 2:00 PM No comments: 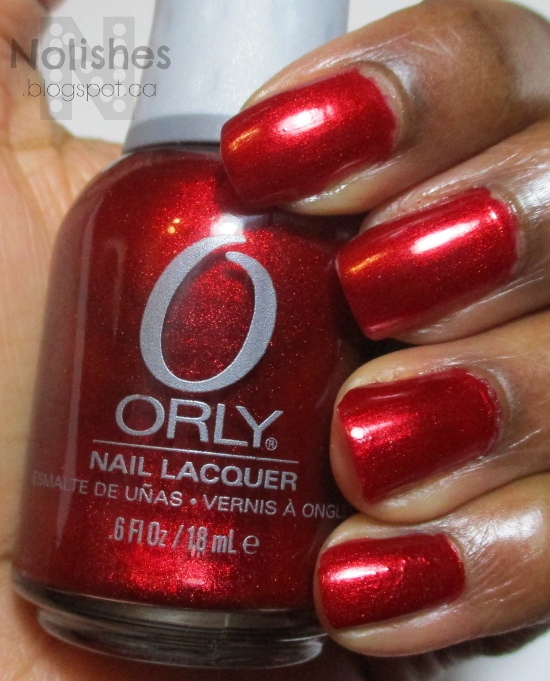 Orly 'Torrid' is truly one of the most gorgeous red polishes that I own! It is the perfectshade of ruby red, with a finely milled shimmer that makes the polish appear to glow from within. This polish is a classic, and can be worn year-round. During the holidays it can be quite festive, however, during the rest of the year it gives such a sophisticated, yet subtly edgy look to a manicure. 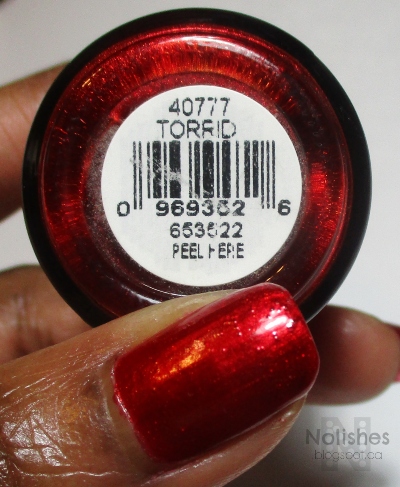 As you can see from the metallic red comparison swatches below, 'Torrid' (#6) is very similar to CoverGirl 'Forever Festive' (#5), and A England 'Perceval' (#7). Perceval is actually a tad cooler toned, but they are still quite close. 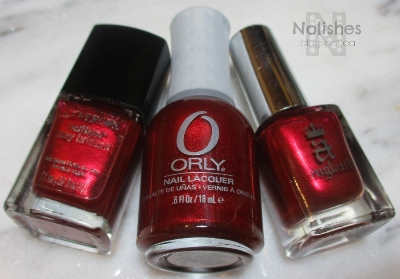 Overall, I would have to say this is an excellent nail polish. The shade is gorgeous, the finish is mesmerizing, and it performs quite well in terms of application and dry-time. I absolutely adore it!
Posted by HoneyBee at 7:12 PM No comments: 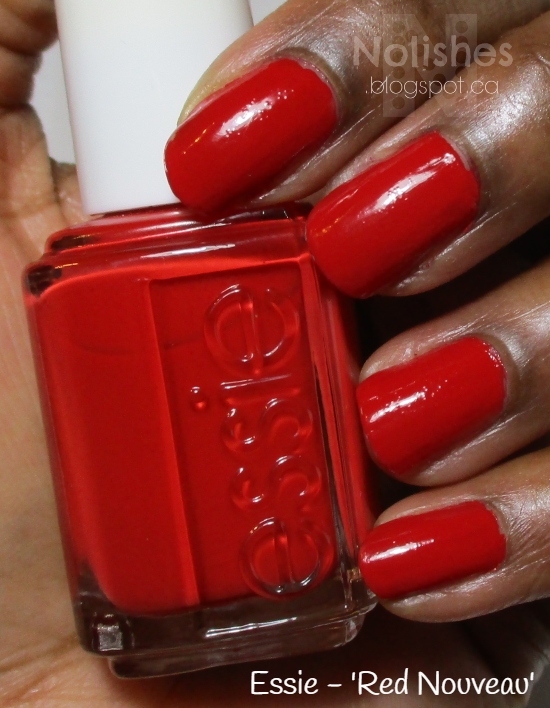 Today I have a swatch of Essie's 'Red Nouveau', a bright crimson red creme polish. This is a classic, summery red shade with a warm, orange undertone. In the swatch, I've used two coats of the polish.

It's such a classic look that there's not really much to say about it other than: if you are in the mood for red nails - this is a wonderful candidate! 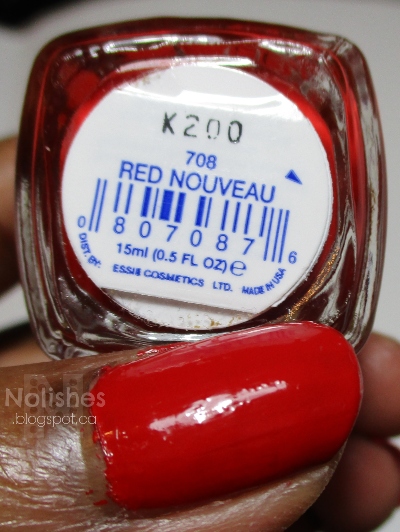 Posted by HoneyBee at 6:00 PM No comments: 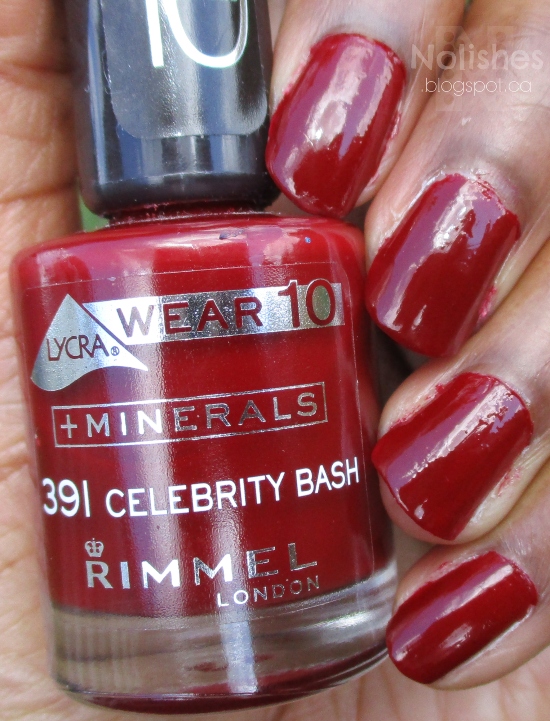 Today I have a swatch of Rimmel's 'Celebrity Bash' to share. In the bottle, and in sunlight, it is  a vampy deep red shade. However, I notice that when applied to the nails, under most indoor lighting conditions it looks more burgundy, taking on a more brownish undertone.

I really like the look of the polish in sunlight, but since I spend most of my time indoors, I don't really enjoy using this polish as a manicure. Going forward, I've decided to use this polish as my pedicure shade, until the bottle is used up. I recently finished my previous pedicure shade, Rimmel's 'Pulsating'.
Posted by HoneyBee at 8:00 PM No comments:

Today I have a quick and easy glitter manicure to share: 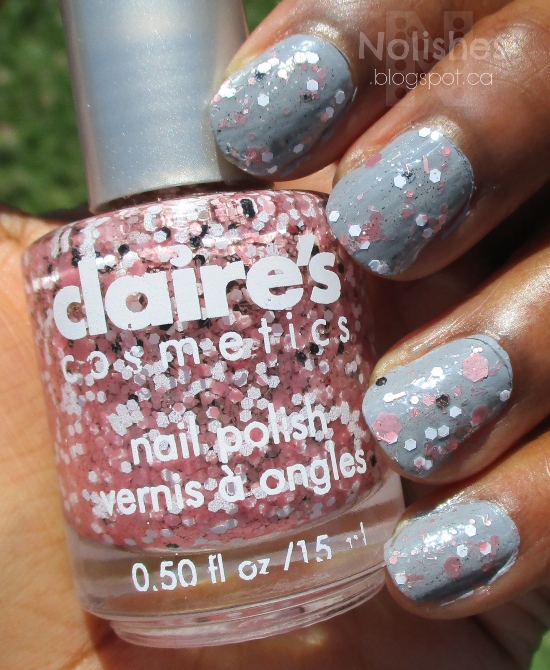 This manicure uses Rimmel's 'Grey Matter' as a base, under a coat of Claire's Cosmetics's Splatter glitter polish in the colorway 'Paparazzi'. 'Paparazzi' was featured on the blog before as part of a manicure I did for my 'Project Polish', you can click here for that entry. 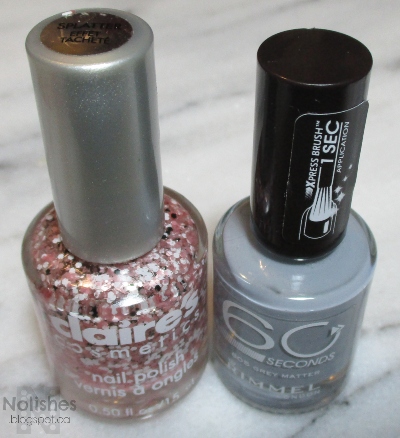 The whole impetus behind this manicure was actually to give 'Paparazzi' one more chance before deciding whether or not to declutter it. The polish is quite old, and it has gone a little gloopy. On top of that, the colorway is pretty limiting, in that it's hard to think of base colors that it would look good with. And finally, the polish isn't really my cup of tea anymore. Because of this, I've decided part with this polish. 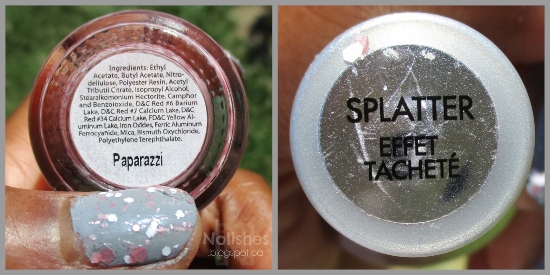 Posted by HoneyBee at 7:00 PM No comments:

Today I have a swatch to share of Rimmel 60 Seconds nail polish line in color number 805, 'Grey Matter'. 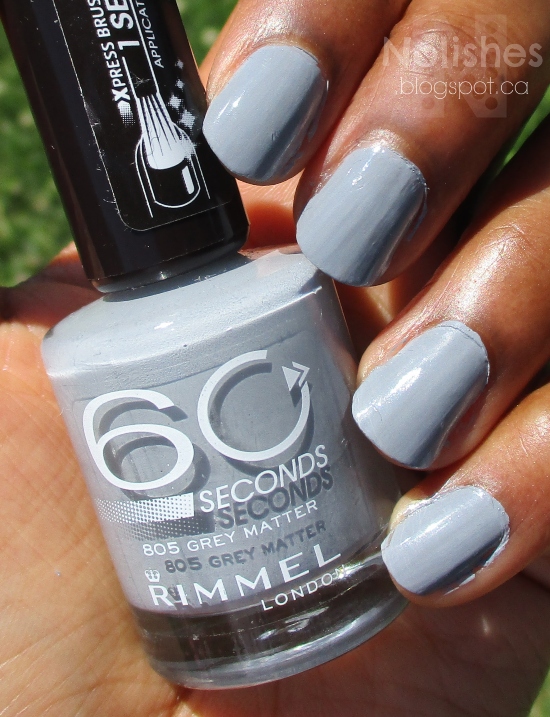 This is a medium grey creme polish that does in fact dry rather rapidly. Since it is pretty quick-drying, I found it necessary to be very deliberate with application to get a smooth coat. I found it worked best when I worked quickly, and was careful not to overwork the polish. When I did this, it self-leveled quite nicely and dried to a decent finish.
Posted by HoneyBee at 7:00 PM No comments:

Revlon 'Glitter in the Air' 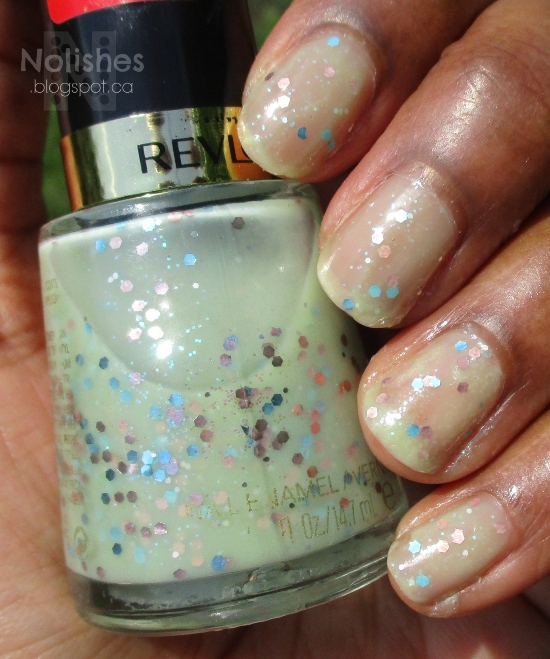 Today, just in time for "Throwback Thursday", I have an oldie but goodie nail polish to share - Revlon's 'Whimsical'. There's quite an interesting history behind this polish. I think it came out sometime around late 2011 or early 2012.  It was a dupe for a really popular polish at the time by Deborah Lippman, called 'Glitter in the Air'. The Deborah Lippmann polish was named after and inspired by a song by the artist P!nk, which she famously performed at the 2010 Grammy Awards while doing aerial acrobatics.

I remember being so excited to buy this polish back in the day. It looks so gorgeous in the bottle - the colours work so well together.  Also, there was a bit of a novelty factor, as crelly glitter polishes were not that common back then in mainstream brands.

This particular bottle has held up well for how old it is (I'm not sure exactly when I bought it, and I think the polish was available for a few years after it was released). The base may have yellowed slightly, as I seem to recall it being more of a brighter sky blue, but it still looks essentially the same.

All in all, it was fun to pull this polish out of the collection and take a trip down memory lane! 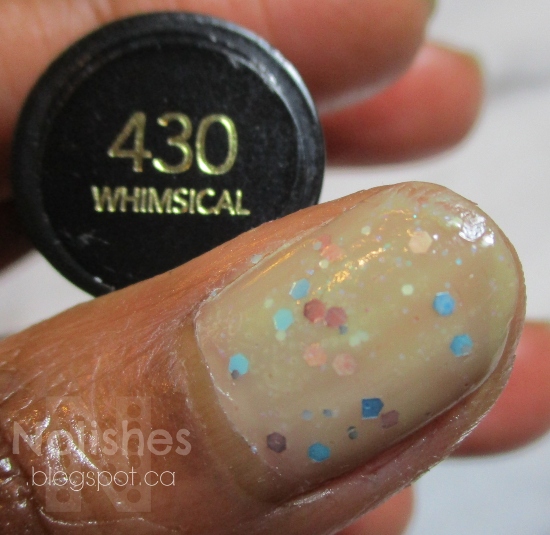 Posted by HoneyBee at 8:00 PM No comments: